LEXINGTON, KY (Oct. 24, 2021) – Highlander Training Center’s Summer in Saratoga held off a late bid from favored Luck Money by a half-length to win the 30th running of the $150,000 Rood & Riddle Dowager (G3) for fillies and mares Sunday afternoon. The victory keyed a 1-2-3 finish for distaffers who raced at the FanDuel Meet at Kentucky Downs in their last start. 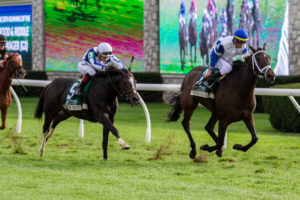 “Just her running style and just her being; she’s very easy to turn on and off,” winning trainer Joe Sharp said of running Summer in Saratoga 1 1/2 miles for the first time. “That’s what it takes in these distance races: being able to settle and have that turn of foot. She’s been a filly that’s been really good to us. She’s the definition of a team effort. Highlander Training Center did a great job with her over the winter. (Bloodstock agent) Clark Shepherd picked her out. (Owner) Larry Hirsch has had a lot of patience with this filly, and it’s paid off. That was her final start for us. We’re definitely going to miss her. She’s been a special filly to us.”

Ridden by Corey Lanerie, Summer in Saratoga covered 1½ miles on a turf course rated as good in 2:30.02. It is the first victory in the Rood & Riddle Dowager for Sharp and Lanerie.

On the far turn, Lanerie eased Summer in Saratoga off the rail, moved three wide into the stretch where he split horses at the three-sixteenths pole and drew off with enough left in the tank to hold off Luck Money.

At three-eighths pole, Keeneland announcer Kurt Becker announced that he saw Lanerie grin. The jockey said afterward that he knew he had that much horse underneath him.

“I did,” Lanerie said. “She was traveling really well throughout the whole race. I asked her for a little bit to check on her and see what I had, and I could tell I had a lot left, so at that point I was just looking for a path and trying to set my way where I could get on through.”

In winning her first graded stakes and third stakes overall, Summer in Saratoga added $90,000 to her bankroll to increase her career earnings to $429,572.

A Keeneland sales graduate, Summer in Saratoga is a 5-year-old Kentucky-bred daughter of Hard Spun out of the Arch mare Love Theway Youare.

Owner Godolphin said this was to be the last race for Micheline, who finished second in last year’s Grade 1 Queen Elizabeth II Challenge Cup at Keeneland, before retiring to their broodmare band.

“She has been a lot of fun and a treat for everybody,” said Godolphin USA President and Racing Manager Jimmy Bell. “We will let her settle in and then decide on breeding plans. She will go to our farm (Darley) from here. It is always fun to watch horses progress, and she has been an all-star.”

Kelsey’s Cross finished another 1¼ lengths back in fourth and was followed in order by English Affair, La Lune (GB), Viburnum, Key Biscayne, Eesha My Flower and I Hear You.

A weanling half-brother to Summer in Saratoga has been cataloged to Keeneland’s November Breeding Stock Sale, to be held Nov. 10-19. Consigned by Denali Stud, agent, the son of Omaha Beach is Hip 935.

Today was Heroes Day Presented by Rubicon, which honored members of the military (active duty and veterans) and first responders (law enforcement, firefighters, EMTs and health care workers) and their families with free general admission and access to reserved Grandstand seats. Guests enjoyed free lunch from City BBQ and children’s activities in the Family Zone in the North Terrace.

The afternoon included a number of recognitions in the Winner’s Circle and around the track.

Click here for an unfurling of the American flag by the Henry Clay High School Junior ROTC. Dr. Everett McCorvey of the University of Kentucky Opera Theatre led the crowd in the singing of “America the Beautiful.”

As part of Heroes Day Presented by Rubicon, Keeneland remembered those who have made the ultimate sacrifice in service to their country. Keeneland placed wreaths on four reserved benches on the trackside apron in memoriam of the 13 service members killed in Kabul, Afghanistan, on Aug. 26.

Also, the POW-MIA Chair of Honor near the Paddock represented the program that brings awareness to past and current POW-MIA military members through a partnership with The Rolling Thunder Kentucky Chapter 5.